Dennis Shipp, a 58-year-old medical equipment technologist who lives near St. Louis, found himself jobless after the recession hit. Three years later, he was still looking for work when a recruiter from the local office of global staffing company Adecco Group called with a temporary job at a medical equipment company. Shipp took the position early this year and, much to his relief, was converted to full-time status over the summer.

“I thought I was washed up,” Shipp says. “There was a vast pool of workers competing for the same jobs I wanted. Then, out of the blue, I received a call from Adecco.” Now, he says, he goes “to work every day hoping to learn something new to make myself more valuable and to help my company achieve its goals. And I’ve made new friends along the way. Who could ask for more?”

Shipp discovered what has become the salvation for thousands of workers idled by the recession: contingent labor. With economic uncertainty keeping a lid on permanent hires, the market for temporary help has been one of the bright spots, adding jobs at a much greater pace than the overall U.S. workforce.

“In some ways, this is an ideal economy for the use of flexible labor,” says Barry Asin, president of Staffing Industry Analysts, a sister company to Workforce Management at Crain Communications Inc. “There is some economic growth, companies have demands and needs, but there is a lot of uncertainty. Using flexible work to help manage during uncertainty is a good thing.”

There is no uncertainty about one thing: Staffing company revenue and profits have been surging since the start of 2010. Zurich, Switzerland-based Adecco saw revenue rise 17 percent in the first half of 2011 over 2010, while net income surged 56 percent. Those results followed a big jump in both revenue and profits for 2010 over 2009.

“Customers are using more flex labor in this very volatile market right now,” says Joyce Russell, president of Adecco Staffing in the U.S. “I am still very positive about the rest of the year.”

Similarly, Dutch firm Randstad Holding reported revenue growth of 17 percent in the first half of 2011, while unadjusted net income jumped 49 percent. Milwaukee-based ManpowerGroup, which was coming off a costly reorganization, saw revenue rise 23.7 percent for the first half of this year, while net income soared by 205.8 percent.

Staffing executives reported fairly strong demand for contingent labor across the country and various job classifications, including industrial, clerical, medical and technical. The one hiccup was a brief break in demand for certain industrial fields, including automotive, after the Japan earthquake in March disrupted supply chains and stalled production.

In the technology field, the outlook for temporary staffing remains strong. A survey released in July of information technology executives by TEKsystems, a Hanover, Maryland-based technology staffing company, found that 40 percent planned to increase temp hiring in the third quarter, up from 36 percent in the second quarter. At the same time, those executives said they planned to make 38 percent more permanent hires in the third quarter, down from 41 percent in the previous quarter.

Still, maintaining the recent level of growth in temporary help through the rest of 2011 and beyond may be difficult, with several staffing executives voicing concerns about recent gyrations on Wall Street and the uncertain economic outlook.

Manpower senior vice president Jorge Perez says he began seeing a plateau in demand for contingent labor by summer, after more than a year of rapid expansion.

“We had a lot of industrial jobs come back last year,” Perez says. “We were able to maintain that trend in the first couple of months of this year. But then there was a little bit of softening. Nothing is falling off a cliff yet. It’s just steady Eddie.”

Despite the growth, the staffing industry is still a long way from filling the number of positions it had before the recession. “The staffing industry lost one-third of its jobs during the recession,” says Steve Berchem, vice president of the American Staffing Association. “Even though we have added hundreds of thousands of jobs since then, we have only come back about halfway.”

In its annual outlook report this summer, the association cited U.S. Bureau of Labor Statistics figures showing that nearly a half-million temps were added to the workforce between June 2009 and June 2010, accounting for 91 percent of total nonfarm job growth during the period.

Some of the growth in contingent labor appears to be coming at the expense of permanent jobs. Staffing company executives offer anecdotal evidence that their clients seem to be allotting a higher percentage of their jobs to contingent labor and remain reluctant to invest in permanent employees with the economic outlook still so fuzzy. “I am finding that whatever a company’s percentage [of contingent labor] was three years ago, it is almost double that now,” says Dan Campbell, CEO of Higher Dynamics, an Atlanta-based staffing firm.

Mitzi Tann, human resources director with Bertch Cabinet Manufacturing Inc., which makes kitchen and bathroom cabinets and related fixtures in Waterloo, Iowa, says part of her challenge is to retain good temp employees who aren’t being converted to permanent workers. Because of the cloudy outlook for the construction industry, Bertch has been using temps, many of them sourced through Manpower, to supplement the manufacturer’s 720-member workforce at three production facilities.

“We just haven’t given people the green light to hire,” Tann says. “We are hesitant. You don’t want to hire somebody and then turn around and get rid of them.”

“When you need 25 people, you pick up the phone and you have all of them,” Lauffer says. “When you don’t need them, you just tell them the assignment is done.”

Lauffer may be unusual in the amount of contingent labor he uses, but he is indicative of a trend toward temps. In a 2011 McKinsey Global Institute survey of 2,000 employers, 34 percent said they expect to use more temps and contractors over the next five years.

Staffing firm executives say that while they have seen rising demand for their services, the task of finding qualified candidates has become more difficult. The high unemployment rate has created a flood of applicants for open positions, but most don’t meet job requirements. Aaron Green, president of Professional Staffing Group in Boston, says only about 11 to 12 percent of the applications and résumés his firm reviews for open positions merit a closer look. “It is a challenge weeding through all the available talent to find the right people,” Green says.

It can also be an expensive exercise. To reduce the cost, Green helped launch an offshore company called PSG Global two years ago that specializes in reviewing and culling job applications. Based in Los Angeles, PSG Global operates two offices in the Philippines, where 225 recruiters source potential workers for open jobs in the U.S. for Green’s company and about 50 other staffing and talent search firms. Lower wages in the Philippines means PSG Global can do initial screening more cheaply than in the U.S.

Appropriately, perhaps, staffing firms use an offshore entity like PSG Global to be more flexible themselves. They had to lay off recruiters when the recession hit, and demand for temporary labor plunged. As demand picked up again, staffing firms remained cautious about building up their own recruiting ranks too quickly. “As staffing companies needed to add capacity over the last year and half, they could use us to add that capacity without longer-term commitments,” says Brian Cotter, president of PSG Global.

In another twist on the problem of dealing with a glut of job candidates, some corporate human resources departments are making greater use of staffing companies to help them screen applicants for permanent jobs. They are in effect using staffing firms as recruiting temps.

Frank Brown, human resources director in the San Francisco sales office of global construction products manufacturer Hilti Corp., says he gets three times as many applicants for jobs as he did before the recession. Instead of hiring extra HR personnel, he has contracted with Manpower and other staffing firms to help him weed through résumés. If the economy slows, he can simply let the contracts lapse rather than lay off recruiters.

“I don’t want to add a huge cost by adding additional recruiters,” Brown says. “So I use [staffing firms] as a kind of contingent recruiting service.” 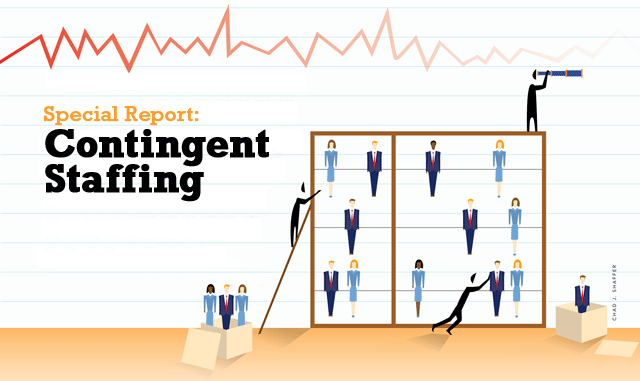