When Peoria, Arizona, realized a few years ago that it wouldn’t be able to attract trained water- and wastewater-department employees from other municipalities, it decided to take a grow-your-own approach. It would cultivate its own talent to take over operations when the current crop of employees retires.

In the city, which has a population topping 150,000, 80 percent of the workers in the water and wastewater divisions are older than 50, which will create a major talent crunch as they retire over the next decade, says Bobbie Kimelton, the city’s human resources manager.

Some people view these as labor-intensive jobs, but “they require a different skill set than they used to,” Kimelton says, including high-level math and science skills. But, she says, most 17- and 18-year-olds don’t think, “I always wanted to work in a wastewater plant.”

Because new recruits are few and far between, the city decided to launch its own apprenticeship program in 2008 under the auspices of the Public Works-Utilities Department. City leaders figured that “if we don’t start now, the time will come when people will retire with no replacement in place,” Kimelton says.

The program provides college classes and on-the-job training, totaling more than 6,000 hours of education for each worker, to create certified water-utility workers. Apprenticeship programs are common in the private sector or through specific unions, but they’re much rarer in municipal governments, especially in the West, Kimelton says.

Courses are taught by instructors from GateWay Community College in Phoenix, as well as experts from state and local agencies, supervisors and city workers. Although Peoria employees don’t have to guarantee they’ll stay with the city once they graduate, the program “creates a sense of loyalty,” Kimelton says.

For creating a registered apprenticeship program to develop talent in-house, the city of Peoria, Arizona, is the 2011 winner of the Optimas Award for Managing Change. 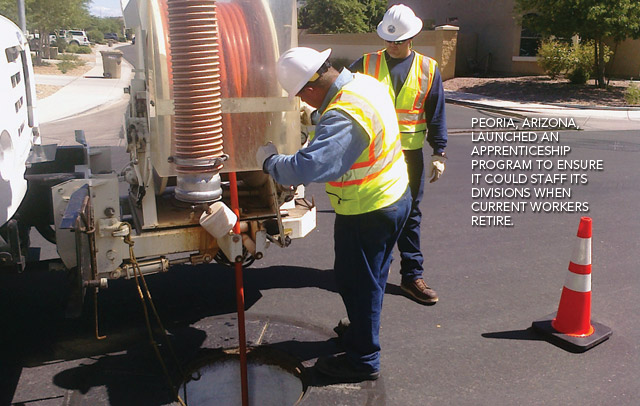