What You Need to Know About Your Office Lottery Pool

Late Friday afternoon (when the Mega Millions was only a mere billion dollars), I received a phone call from Brian Duffy, a reporter from our local CBS affiliate.

“We are doing a story on office lottery pools. Are you the right person for me to interview about some of the legal risks?”

Two hours later, he was in my living room with a camera person interviewing me.

“Everyone is your friend until you’re looking at a billion dollars, and all of a sudden, that kind of stuff goes out the window because people get motivated by greed,” I told him.

You can watch the rest of my thoughts here.

As for office lottery pools, the legal risks (if you are lucky enough to win) fall into two major categories.

1. An employee claims the winning ticket for him or herself.

For example, in 2009, Americo Lopez quit his job after discovering that one of the office pool Mega Millions tickets he was holding won the $38.5 million jackpot. When his co-workers learned of his deception, they sued, and each collected their share of the jackpot.

2. An absent employee was not able to participate.

For example, in 2011, Edward Hairston sued his Youngstown cabinet-company coworkers, claiming they froze him out of their $99 million payout. His lawsuit claimed that he had participated in the office lottery pool for eight years, and his co-workers failed to cover his ante while he absent with a back injury. The parties reached a confidential settlement.

So, what can you do to mitigate these risks in your office pool?

The best, and safest course of action, is to draw up a written contract for each member of the office pool to sign. That said, as I pointed out during my interview, these are exceedingly rare.

Still, there are less formal measures you can take to limit risk:

And, as for all of the talking heads who are suggesting that employers altogether avoid office lottery pools because of the legal risks, I say grow up and stop being such a killjoy. Lots of things have risk. I drive to work every day, even though my odds of dying in a car crash are 1 in 11,700. My odds of winning the Mega Millions are 1 in 302,575,350.

In other words, you are 26,000 times more likely to die on your way to work than win the lottery when you get there. So why not have a little fun, promote some office camaraderie, and spend a few dollars. And, in the extremely off chance that you actually win, the worst that will happen is that you might have a wait a bit for your pot o’ gold while some legal issues sort themselves out.

Jon Hyman is a partner at Meyers, Roman, Friedberg & Lewis in Cleveland. Comment below or email editors@workforce.com. 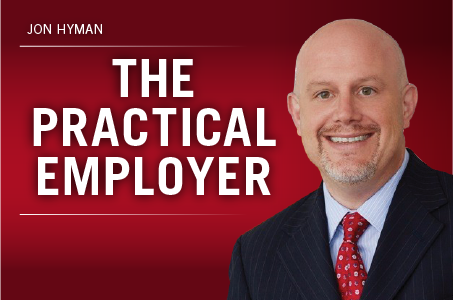