Webasto Roof Systems Americas, a Rochester Hills, Michigan-based automotive supply company, was not immune to the fallout. But unlike the automakers’ relatively quick turnaround, financial and cultural aftershocks of the economic decline lingered at Webasto, the North American division of Germany-based Webasto Group.

“There was so much fear in the organization to be let go. It was unbelievable,” said Philipp Schramm, chief financial officer and vice president of human resources and IT at Webasto. “The industry around us, too, was not so good, like it is now. A lot of people were very worried. If you talked to someone on a Friday, people almost came into your office saying, ‘Do you want to let me go?’ ”

Read about the rest of our 2017 Optimas winners here

In the face of financial difficulties as well as a demoralized workforce, the company had a choice. When both the financial and cultural health of the company is failing, which should it focus on first? The simpler, more direct route was to close plants and lay off employees. Instead Webasto took an unconventional and more long-term approach to financial improvement by first resuscitating its failing culture.

In 2015 Webasto’s corporate culture was ranked among the “worst ever seen” by management consulting company McKinsey & Co. in their “Organizational Health Index.” Schramm, who at the time oversaw just finances, took over the HR role and inherited the sickly culture.

Departments didn’t communicate with each other, he said. They were focused on their own objectives rather than the broader and bigger goals of the organization. Putting out fires was more important than doing things right in the first place, which took a financial toll on the company. The support functions themselves were siloed and flawed, and that spilled out onto the plant floors and other parts of the organization.

Webasto’s solution to building a new culture was separated into several phases. First, the company identified a road map of desired behaviors by asking every employee what their cultural priorities were. The guide, called “Our Compass,” was to be incorporated into the organization’s core values because it inherently included the cultural needs of all employees. Then, Webasto set out to create an environment that encouraged listening.

Meetings known as listening sessions resulted in crucial insights, Schramm said. A colleague, rather than a manager or executive, was trained to facilitate small-group discussions. This person would start a discussion among a large group of employees with a question like, “What are your hopes and fears at Webasto?”

A lot of valuable information came out of these discussions because the facilitator didn’t interrupt or comment on the discussion but instead let people talk. For example, an employee didn’t know a bereavement policy was in place, Schramm said. Because it was a listening session, the goal wasn’t about correcting the employee’s misunderstanding about available benefits but to listen and learn.

“It’s not on the colleague because he didn’t understand it,” Schramm said. “If he feels that way, then it’s our job as a management team to fix this and make it so clear that everyone in the organization understands it.”

The company also had to overcome employee distrust. Many colleagues had been with the company for almost 30 years. “What they’ve shared with me is, ‘I’ve seen so much already. It’s just another flavor of the month,’ ” Schramm said. They didn’t want to invest themselves in the process only to be disappointed.

Schramm relied on transparency to combat the dispirited attitude.

“I cannot ensure you this will work out,” he told employees. “But everything I can do and what I can influence I will do to drive this to success.”

The culture change project, which spanned from January 2015 to November 2016, provided positive results in a short period of time. Webasto did a re-survey with McKinsey’s OHI again in 2016 and came out with a score 18 points higher than before, the largest improvement McKinsey had seen in a 15-month period.

It also saw a drop in voluntary employee turnover. And, after being in a grim financial situation in 2014, Webasto’s U.S. operations returned to profitability by mid-2016.

Initiatives from the project continue today, and in November 2016 Webasto hosted and funded a three-day event called the Strategic Planning Summit in Detroit to discuss its past problems, celebrate its current successes and plan for the future.

“The summit was another advancement in Webasto’s way of listening to colleagues and engaging them in developing solutions to sustain momentum every day,” wrote Gwen Knapp, communications manager at Webasto Roof Systems Americas, in the company’s Optimas application.

Participants at the summit developed 20 ideas to improve business performance, Knapp said. Today there is a team responsible for helping advance implementation on these plans.

“Pushing the organization to achieve operational excellence without layoffs led to dramatic improvements both to culture and the bottom line,” she added.

Schramm likened Webasto’s renaissance to Detroit’s gradual improvement, which emerged from the Great Recession as a “broken city” and has slowly emerged as a city on the mend.

“We have evolved from the lessons learned from these hard times when we hit rock bottom, and came back up,” Schramm said.

For its workplace initiative, which demonstrates excellence in the Optimas categories of Business Impact, Managing Change, Innovation, Vision, Training, and Benefits, Webasto Roof Systems Americas is the 2017 Optimas Award winner for General Excellence. 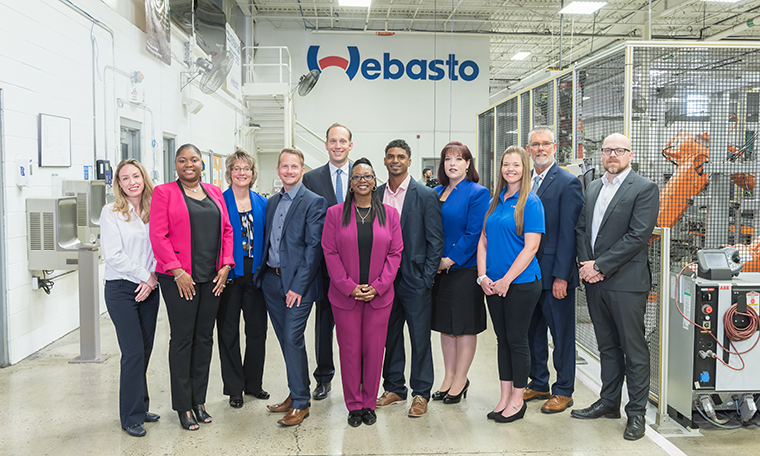