When Tesla added a pair of independent directors to its board late last year, the bulk of the attention went to the more famous of the two — Larry Ellison, Oracle’s billionaire founder and a recent Tesla investor.

Wilson-Thompson, 61, is the latest C-level HR professional picked for a board seat at a U.S. public company, part of a nearly three-fold increase over the past decade in CHROs and other top HR executives with positions on U.S. corporate boards.

Boards historically shied away from adding members without operating experience, but more have warmed to the idea of including HR experts to better grapple with risk and compliance issues related to everything from the #MeToo movement and diversity to rising employee activism. A tight labor market that’s made companies appreciate the value of a strong corporate culture and a positive employer brand also is contributing to HR executives’ attractiveness as board members.

“Boards typically haven’t had great insights into what’s happening in the organization,” said Donald “DJ” Schepker, research director at the University of South Carolina Center for Executive Succession, which studies board issues. “Having directors with HR expertise allows them to ask more pointed questions about the culture, and in today’s environment, that’s probably the top issue that boards are focused on.”

Wilson-Thompson has been Walgreens’ CHRO since 2010, four years before the company acquired Boots Alliance to create a global retail and wholesale pharmaceutical giant that today has approximately 418,000 employees and annual revenue of $117 billion. Before joining Walgreens, Wilson-Thompson spent 17 years at Kellogg Co., in various corporate HR and legal roles.

As a woman and African American, Thompson adds to the diversity of Tesla’s board, which previously had two women and two people of color out of nine board members. As a former employment lawyer with a decade of board duty, she also brings experience that the board could use as Tesla deals with management and people issues on multiple fronts.

Tesla added the independent directors to settle a Securities and Exchange Commission complaint that alleged CEO Elon Musk lied in an August Twitter post about securing funding to take the company private. As part of the settlement, Musk stepped down as chairman, and he and the company paid separate $20 million fines.

A Preponderance of Workforce Challenges

After boosting its workforce by 30 percent in 2018 to meet demand for lower-cost Model S sedans, Tesla in mid-January announced a 7 percent layoff. The reduction will help cut operating expenses in advance of shrinking U.S. tax credits for electric cars that will effectively boost Tesla vehicles’ sticker prices, according to a Jan. 18 email Musk sent to employees.

Wilson-Thompson did not respond to several requests for comment. A Telsa spokesperson declined to comment beyond a Dec. 28 statement announcing the board appointments. In it, the company praised her for bringing “a passion for building and promoting great workplaces.”

Gaining a Seat at the Table

Securing more board seats could be the outcome of the much-discussed, long-hyped goal of getting HR a seat at the table. From 2005 to 2017, the number of HR executives on U.S. public company boards almost tripled, from 84 to a record high of 243, according to Equilar, the executive compensation and corporate governance data analysis firm. Equilar compiled the data by reviewing board seats held by HR executives at companies in the Russell 3000 index, which represents approximately 98 percent of all U.S. public companies.

Even so, the portion of C-level HR executives with board positions is minuscule. Only 3.7 percent of U.S. HR pros who are named corporate officers at the companies they work for also sit on one or more corporate boards. That represents an increase from about 2.4 percent in 2005, but a drop from a high of 5 percent in 2014, according to Equilar.

Wilson-Thompson’s appointment also highlights the increase in the number of women on corporate boards. In 2018, women comprised 18 percent of U.S. corporate directors, up slightly from 16.5 percent in 2017, according to Equilar.

Last year, California became the first state to mandate that by the end of 2019 public companies have at least one female director, a number that by 2021 will rise to two for boards with five members, and three for boards with six members or more. In December, a bill was introduced in the New Jersey state legislature that if passed would impose the same requirements on companies based there.

Despite the bigger role that HR executives play on some boards, others still will not consider CHRO candidates because many of those individuals lack operating experience. CHROs also must combat a misperception that HR professionals aren’t good with numbers, an outdated notion given today’s widespread use of analytics in HR departments but one that nevertheless persists.

“If I have a half hour with a CEO, they’ll walk away convinced they need an HR person on their board,” said Robert Lambert, a former CHRO at Macy’s, Patagonia and REI who now works as an executive search consultant for Allegis Partners. “But the big search firms have thousands of people who look fabulous on paper. Why would they go to the extra effort to pitch an HR person? They don’t, it’s not worth their time. Even for the most accomplished female or diverse candidates, it’s virtually impossible.”

Waiting in the Wings

To get around that kind of thinking, organizations that support HR leaders or women in management run programs to ensure that when the call comes, their members and clients are ready.

According to Women Corporate Directors, a New York organization that supports women on private and public boards, about 18 percent of its 2,400 members sit on Fortune 500 boards. The organization is piloting programs in New York and Los Angeles that groom C-level women executives looking for their first board appointments. The timing is right, said Susan Keating, the organization’s CEO. “Whether it’s #MeToo or the California legislation around women in boardrooms, there’s a heightened awareness of the need for more diversity, and more gender diversity.”

Catalyst Inc., the women’s leadership consulting and advisory firm, created a program in 2013 to coach CHROs and other women with at least 10 years of C-level experience to fill board vacancies. Members of Catalyst Women on Board meet eight times over two years to set goals, strategize and get feedback from mentors. “Having a diverse board with women and people of color enhances problem solving,” said Meesha Rosa, Catalyst’s senior director, corporate board services. “It sets the company up to win in the market of the future.”

Employees, shareholders and other investors are holding boards responsible for corporate-level decisions made under their watch. A recent example of that is the lawsuit that shareholders of Google parent company Alphabet filed in January over a former Google senior executive who was accused of sexual harassment but still awarded a $90 million exit package when he left the company.

“Boards are going to have to be more accountable,” said Johnny Taylor, CEO at the Society for Human Resource Management. “We’re in this knowledge-based economy, so you can’t just dismiss it. You can’t just replace talent. It could be your superstars that don’t want to work here. That’s changed the game.” 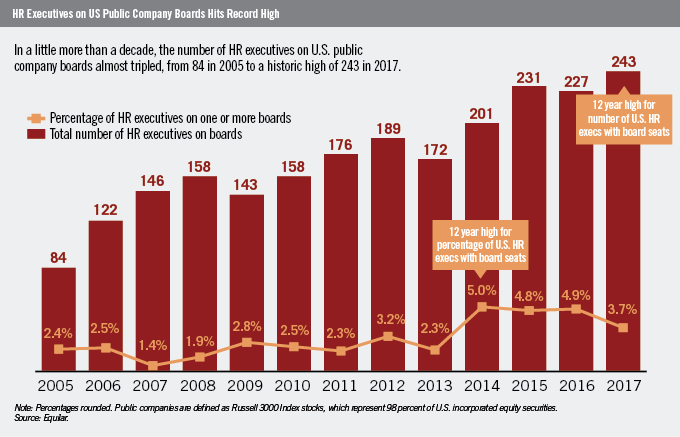