The old-school job board model, where employers pay a website to post open positions and hope that qualified candidates will find and apply for them, may not be as flashy or talked about as some of today’s bright, shiny Generation Z gig-worker

marketplace products. But since the dawning of the job board as we know it some 30 years ago they appear to remain a viable business model with plenty of life.

In 2018, online job advertising companies earned a total of $22 billion, according to Staffing Industry Analysts, an increase of 15 percent. And while many companies offer advanced services such as programmatic job advertising or social media tools, the leader in many markets “is a traditional job board that makes 70 to 80 percent of its revenue from job postings,” said Jeff Dickey-Chasins, principal of the industry consulting firm JobBoardDoctor LLC.

That doesn’t mean the industry has been complacent. Especially in markets like the United States, the United Kingdom and the European Union, job boards have been exploring new revenue models, new technology and new features. They have little choice, observers say. Recruiting practices are changing, the use of data has become more sophisticated and the demands of job seekers are continually evolving.

Also, the very culture of “being online” has changed. It’s now anytime, anywhere and includes multiple channels such as websites, email, social media and chat. That dynamic can work either for or against the job boards, said NelsonHall Principal Research Analyst Nikki Edwards. Those job boards that have mobilized their platform, integrated with social media, and incorporated other channels “will have greater audience reach, and are more likely to survive, than those who do nothing to adapt or who rest on their laurels.”

It seems like a far cry from the industry’s early days, when job boards were essentially “the old newspaper classifieds,” said Gerry Crispin, founder of CareerXroads, a recruiting-technology consulting practice. “Certainly, a lot of changes have gone on, but the fact of the matter is job boards are essentially the 21st century extension of classified advertising.”

Initially, online job searching was relatively simple: Candidates searched, clicked on a job and applied to it — all without ever leaving the job board. Because applicant tracking systems were just gaining traction, companies around the turn of the 21st century relied on job boards to attract candidates while job seekers used them to deliver their applications to employers. Then, as ATS technology gained traction and more organizations built their own candidate databases, job boards began serving as gateways to corporate career sites.

That encourages job boards to work harder to retain traffic. Rather than charge for how long a post remains online, pay-per-click plays a larger role in their business models. That, too, incites job boards to create simple, effective user experiences.

On another level, the evolution of the ATS changed many job boards from hunter-gatherers to sourcers. “There’s always been that component where if a company wants to source candidates instead of advertise jobs, they could go and look through a résumé database,” said Dickey-Chasins. “There are now job boards whose primary focus is sourcing candidates.”

As an example, he cites Hired. Founded in 2012, Hired offers seekers free profiles designed to match them with employers looking for a particular set of skills and experiences. It then screens those profiles to match a company in, say, Chicago with developers who’ve known the programming language Ruby for 10 years and previously worked at a video game studio. “They’re essentially doing what recruiters used to do, but they do it at a lower price point and in a more automated fashion,” Dickey-Chasins said.

Hired also illustrates how creating the right experience for recruiters is as important as attracting the right candidates. “We have to make sure that we have a seamless experience for the recruiter because they can’t be going to 12 different websites to look at stuff,” Sowash said. “What we need to do is integrate those platforms into whatever your core system is — if it’s an applicant tracking system like iCIMS or a CRM like SmashFly.”

Given the sophistication of today’s data-management systems and application programming interfaces, or APIs, “there’s no reason why we shouldn’t be able to funnel all of these vendors into one core piece of technology,” Sowash said.

The term “job board” has become a bit of a misnomer. For instance, Indeed describes itself as an aggregator that compiles jobs from a number of sources. BioSpace, which focuses on the life sciences industry, says it’s  “a digital hub for news and careers.” LinkedIn is “an online professional network.”

These and other companies offer services designed to streamline their customers’ talent acquisition process, or at least portions of it. Such features include diversity products, job-advertising packages, employer-branding packages and other features that get folded into annual subscriptions, Dickey-Chasins said. LinkedIn Group Product Manager Kevin Chuang said his company is testing a short-form skills assessment to help it uncover more accurate matches.

Rise of the Lifestyle Platforms

Among the most fundamental drivers impacting the job boards’ landscape is the ever-changing dynamics of technology products, experts say. When sites like Monster.com first appeared in the mid-1990s, not only did the ATS not exist but the mobile phone was still a large plastic brick and the internet had yet to squash America Online.

Today’s world looks a lot different: Smartphones are ubiquitous, Amazon’s Alexa looks up recipes on command and Google’s Nest manages temperatures and monitors for smoke in homes around the world. Because of this, features like convenience, ease of use, speed and mobility count toward a job board’s success more than they ever have before. In particular, improved usability has become critical as candidates — who are essentially consumers — have come to expect simpler, slicker user experiences, Sowash said.

Advancing technology also spurred the rise of what Sowash calls “lifestyle platforms” — sites like Google and Facebook that fundamentally changed the way consumers regard online communications. “As soon as we roll over in the morning, we jump into them,” he said. Job boards can’t make the same claim because consumers “aren’t looking for a job every single day of their life.”

Job boards, then, must look for ways to leverage both consumer technology and lifestyle platforms.

“If you’re a job board today, you have to realize that people aren’t waking up in the morning thinking, ‘I’ve got to go to Indeed or I have to go to whatever your brand name is,’ ” Sowash said.  “They’re thinking, ‘I have to go to Google, I have to go to LinkedIn.’ ” As a result, job boards “really have to think much smarter than they ever, ever had to before.”

For the industry’s big names — like Indeed, LinkedIn and IT-focused Dice — that’s meant building suites of talent acquisition tools, facilitating messaging between candidates and recruiters and aggressively developing AI-based search mechanisms and data-visualization features. At the same time, a number of startups are at work trying to solve different talent-acquisition pain points of specific industries.

Not only that, said Chuang, but the process of job searching has become more social and thus more personal. Social networks, for example, allow candidates to connect with workers at prospective employers or ask for referrals. “The job post itself has become one step in the overarching process of the job search,” he said.

“Job boards that are still exclusively focused on job postings and a singular product versus a [fuller] solution are the ones that are really struggling right now,” said BioSpace CEO Joshua Goodwin. “They’re not experiencing the uplift that we’re seeing from this labor market because of a very simple business principle: It’s about really understanding your customer’s pain point and their end goals. Our customers are about trying to hire the right candidates and not about trying to post an individual job posting.”

The Beauty of the Niche

With that thought in mind, niche job boards like BioSpace often focus their product development efforts to align with the behaviors and habits of their audience. Sites that serve truck drivers or skilled tradespeople tend to lean heavily on mobile-first approaches along with texting and universal application models, Dickey-Chasins said. “They try to do things like text-based assessments, to fit the way these people work,” he explained. “In certain sectors it’s super hard to find people, so you basically do whatever it takes to pull those people out.”

Goodwin agrees. “We tell clients that job postings are foundational,” he said. Besides posting open positions and publicizing them, he believes effective job boards provide solutions suites that help companies proactively identify and contact candidates on platforms they might frequent.

That’s particularly important in a job market like today’s, where the candidate pool is small and the most desirable workers are often “passive,” open to opportunities but only the right opportunities. Because those candidates don’t, to paraphrase Sowash, wake up and surf to a job board, sites must think of themselves more as what Goodwin calls “recruitment web sites” that offer “a lot more than job postings.”

On his site, that “a lot more” is content. BioSpace was founded in the late 1980s as a life-sciences media firm. Today, around 700,000 unique visitors access the site each month, mostly to read domain-related content. “They want to know about what’s happening in the industry. They may not necessarily be looking at jobs,” Goodwin said. However, BioSpace’s specialized information provides employers with a launching pad from which to reach candidates.

Successful niche boards, adds John Sumser, principal analyst for HRExaminer, succeed not because of better technology but “because they understand the niche that they’re operating in and they don’t go outside of it.” The moment they attempt to expand beyond their core market, “things fall apart because their expertise is narrow.”

Mark Feffer covers HR, analytics and related technologies from his base near Philadelphia. He is editor of the HCM Technology Report. 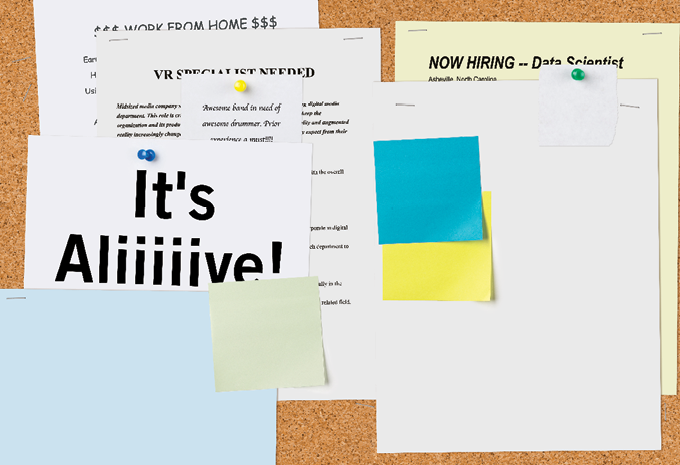