Patagonia Fills Payroll With People Who Are Passionate

Patagonia Inc. CEO Casey Sheahan, still dressed in a cycling jersey and shorts from a lunchtime ride, chats with the human resources director in the lobby of the outdoor clothing and equipment company’s headquarters in Ventura, California. The space, with its Douglas fir staircase and portrait of Yosemite’s El Capitan, feels more reminiscent of a national park lodge than the gateway to a $400 million retailer. At the foot of the stairs stands a door that leads to the company cafe, which serves organic food and drinks. Today’s special: free-range organic barbecue chicken. One of the cafe’s windows looks into the infant and toddler child-care room, whose walls are adorned with art made by employees’ children.

More than 3,000 miles from headquarters, Betsy Pantazelos wraps up a day at the Patagonia store on Newbury Street in Boston. The interior, with its schoolhouse lights and wooden mezzanine, echoes the headquarters’ lodgelike feel. That environment, along with the corporate philosophy and culture behind it, explains why Pantazelos started working there four years ago while in graduate school and has stayed, rising from floor leader to store manager.

“This is a group of people who not only work together, but they play together, too,” she says. “As a result, people stay around longer because they feel supported and understood. The company offers every individual employee a lot of empowerment, and that’s very unusual in retail.”

Perennially recognized as a good workplace for mothers, Patagonia also has earned a reputation for employee loyalty at a time when other apparel retailers commonly see turnover of more than 100 percent annually, according to independent management consultant Robert Bartlett, who has worked in the retailing industry for 35 years. Patagonia had 25 percent combined voluntary and involuntary turnover in its U.S. brick-and-mortar stores as of the 12 months ended in July. Turnover was 7 percent at its headquarters and 6 percent at its distribution center in Reno, Nevada. Those numbers have remained stable during the past 12 years, despite the U.S. economy’s crests and falls.

The industry average in 2010 for all retail was 43.8 percent, according to the U.S. Bureau of Labor Statistics and the National Retail Federation.

Billy Smith, an avid surfer, joined the company four years ago. On days with good swells, he’ll awake at 5 a.m. to test products. “Landing this job was probably the best thing that ever happened to me,” says Smith, 26, a product developer for wet suits and surfing gear. “I feel like I represent the brand as much as it represents me.”

Sheahan, who became CEO in 2006, credits the low turnover to the corporate culture, camaraderie and the company’s “ambitious, authentic mission statement, which is very meaningful to our employees.” That statement: “Build the best product, cause no unnecessary harm, use business to inspire and implement solutions to the environmental crisis.”

“They know what they do each day is contributing towards a higher purpose—protecting and preserving the areas that most of them love spending time in,” Sheahan says.

Patagonia grew out of Chouinard Equipment, a supplier of climbing tools. In the 1970s, founder Yvon Chouinard began selling rugby shirts and shorts made of lawn-furniture fabric. The durable clothes proved popular, and he and wife, Malinda, spun off Patagonia in 1973.

The 1980s brought compound annual growth of as much as 50 percent. But amid the recession of the early 1990s came what employees called “Black Wednesday”: the only large-scale layoffs in company history. Since then, the company has followed a strategy of slow growth. Still privately owned by the Chouinards, Patagonia does not need to please Wall Street and shareholders and can therefore create a culture and mission that aren’t so tightly bound to the bottom line.

Long before much of corporate America embraced “green business,” Patagonia was creating clothes from recycled soda bottles and installing solar panels at its corporate campus. One percent of sales goes to support environmental not-for-profits. Every Patagonia store has an environmental grants budget, and local employees take pride in deciding who gets what.

You can track the environmental impact of more than 150 products on The Footprint Chronicles, an interactive microsite. Select “down sweater” and you’ll read “the good,” “the bad” and the company’s spin through “what we think,” which says Patagonia needs to find a consistent supply of goose down from birds that the company can verify have been treated humanely.

“I really never thought that I’d be in retail,” says Maureen Kent, manager of the outlet store in Salt Lake City, who says she was a ski bum until she turned 38. “But I love the environmental stance Patagonia takes. And I love the fact that we get to give money back to our local organizations.”

The company also lends its talent to green groups. After one year of service, employees can apply for two-month internships with environmental not-for-profits during which time they’re still paid by Patagonia.

Bartlett says Patagonia employees may feel more connected to the company because of their “higher calling.” “Count me a skeptic,” he says, “but they think they’re saving the world.”

At the headquarters, an easy one-block walk from the Pacific Ocean, employees lean their surfboards against a wall near the cafe and break from work to catch waves. Restrooms include showers to freshen up after jogging, biking or even playing volleyball.

No one has private offices. Employees wear headphones to signal that they can’t be disturbed. Guests are obvious because they’re the only ones in traditional business attire.

Val Franco, one of the first employees hired, left in 1976 and then returned in 1985. “What’s cool about this place is the culture,” Franco says. “We have this amazing day care and there are parents who are like-minded helping you raise your children, so it’s sort of a village.”

To help sustain the retailer’s culture, every new hire receives a copy of Chouinard’s book Let My People Go Surfing, which charts Patagonia’s history and philosophies. New workers also are introduced at quarterly meetings, open to all employees, where executives review the financials. After all, employees may receive bonuses linked to their performance, responsibility and salary if the company meets or exceeds goals, financial or otherwise.

“We know what we’re doing by generating revenue for this enterprise is helping preserve the environment, and that’s really important to a lot of us,” says Lu Setnicka, director of human resources. “But we don’t want to go out of business doing the right thing. We still have to remain profitable.”

Indeed, Bartlett, the consultant, says, “Being fond of the outdoors and being next to the bears and so on is not a qualification to be a successful sales associate in the stores. The two things may be in opposition.”

To boost employee morale, which often can lead to success, the company encourages celebrations. In Reno, a group known as the Fun Patrol organizes parties throughout the year. And the outlet store in Salt Lake City closed for an entire Wednesday in August. Instead of selling merchandise, the staff brought paddle boards, kayaks and bocce ball sets to the nearby Jordanelle Reservoir for what they called a “field day,” a company tradition.

Setnicka coaches managers to define expectations, communicate deadlines and then trust their staffs with freedom to figure out when and how to meet those deadlines. “That doesn’t mean you leave them floundering,” she says. “You have a responsibility to check in and see how they’re doing.”

“When you walk through the front door here, you don’t have to shed part of who you are,” says Setnicka, whose son also works for the company. “For some organizations, that’s unfortunately what you have to do. You have to leave behind your role as an activist or your role as an athlete or your role as a parent. At Patagonia, when you come through that front door, every aspect of you is celebrated.” However, Setnicka acknowledges that this flexibility varies by project and role. “Someone who works in a retail store can’t say, ‘I think we’ll open the store at noon today,’ ” she says. “There are certain hours of operation.”

But retail employees such as Bruce Livingstone, who works at the company’s flagship store in Ventura, says the company has provided flexibility when they needed it most. When a family member fell ill, Livingstone wanted to return to the East Coast. It was a stark difference from his experience working for other retailers. “The company was very flexible and said, ‘Take whatever time you need,’ ” Livingstone recalls. “They do what’s right and worry about the bottom line after the fact. It just reinforced the reason why I’m here.” 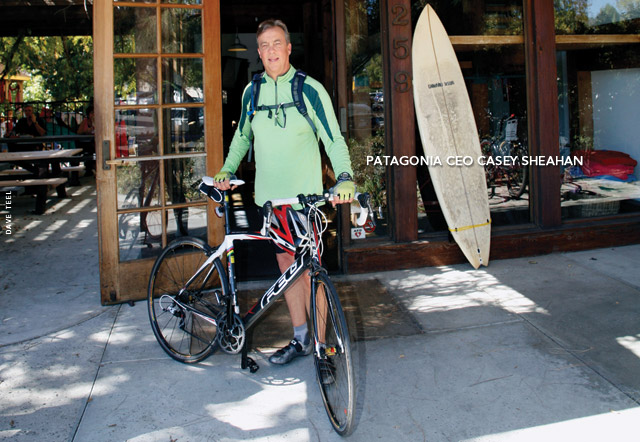