After months of anticipation, the U.S. Department of Labor withdrew its Independent Contractor Final Rule on May 5.

In light of the Labor Department’s withdrawal of the Final Rule, employers will continue to be subject to the existing “economic realities” standard applied by the agency for determining whether a worker is an employee or an independent contractor. However, employers should remain vigilant as the Labor Department may soon revisit this issue.

Because the FLSA provides minimal guidance to employers regarding worker classification, the Labor Department and the courts have developed their own standards, including the so-called “economic reality” of the relationship between the employer and the worker.

Before the Final Rule, the Labor Department and most courts had long utilized a six-factor test for determining whether a worker should be classified as an independent contractor or an employee. The Supreme Court originally set out this test in United States v. Silk, indicating the following factors:

Since the Silk ruling, most federal courts and the Labor Department analyzed employee classification using a variation of the multifactor weighing test with all factors being given equal consideration. Indeed, in its primary regulatory guidance issued in July 2008, the Labor Department confirmed in Fact Sheet 13: Employment Relationship Under the Fair Labor Standards Act its reliance on the economic reality test and listed seven factors to be considered, which largely mirrored the six factors identified in Silk and added the “amount of initiative, judgment, or foresight in open market competition with others required for the success of the claimed independent contractor” as an additional factor to be considered.

Breaking with the Labor Department’s prior practice of treating these seven factors as equally weighted, the Final Rule sought to pare the inquiry down to five factors and stated that two of those factors — the “nature and digress of the individual’s control over the work” and “the individual’s opportunity for profit or loss” — should be “afforded greater weight.”

As such, the Final Rule directed that only if the two core factors were inconclusive should the three remaining factors — namely, the skill or expertise required by the individual; the permanency of the relationship between the parties; and whether the work is part of an integrated unit of production — be considered.

Although many praised the Final Rule for simplifying what has become an inconsistent patchwork of approaches to the economic realities test in courts across the country, the Labor Department has since stated that the Final Rule was inconsistent with the FLSA’s text and purpose, and would have a confusing and disruptive effect on workers and businesses alike due to its departure from longstanding judicial precedent. Accordingly, the agency announced May 5 that the Final Rule was withdrawn effective immediately.

The Labor Department has not stated whether it intends to issue new guidance or regulations addressing the classification of independent contractors. Further complicating this issue for employers, both the initial delay of the Final Rule and its subsequent withdrawal are the subjects of a lawsuit pending in the U.S. District Court for the Eastern District of Texas brought by four employer-focused interest groups who seek the court’s intervention to declare the withdrawal unlawful and make the Final Rule effective.

The lawsuit is in its initial stages, and it remains to be seen how it will be resolved.

If that occurs, it is expected that the Labor Department would take a more aggressive approach toward enforcement of worker classification laws and seek to further narrow the subset of workers who may be properly classified as independent contractors under the FLSA, particularly gig economy workers.

Notwithstanding the pending legal challenge to the withdrawal of the Final Rule, employers would be wise to evaluate their practices as to classification of employees and ensure that any independent contractors are properly classified under the Labor Department’s current 2008 guidance.

Alex Dominguez is a partner in Neal Gerber’s Labor & Employment practice group. He counsels and litigates on behalf of public and private companies from a wide variety of industries, on federal and state labor and employment law issues nationwide. 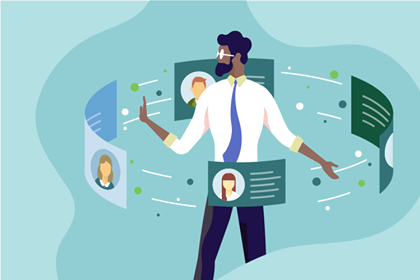