Appearing in text messages, emails, on T-shirts and even their own movie, emojis — cartoon representations of emotions and common objects — are a ubiquitous presence in people’s lives and daily communications with one another.

Seventy-one percent of Americans use visual expressions such as emojis, stickers or GIFs when texting or using mobile messaging apps, according to a 2017 survey conducted by Harris Poll on behalf of Tenor, a mobile GIF sharing platform.

But there are potentially sinister motives in the workplace behind an innocent emoji martini glass or kissing cat. Given their widespread use, employment attorneys recommend employers review their employee handbooks and consider whether there should be rules governing emojis in office communications. A smiley face or shruggie may be acceptable in a text or Facebook post outside of work, but they could cause problems for HR leaders in the workplace.

“We’re not only looking at words anymore; we now have symbols,” said Kelly Hughes, shareholder at law firm Ogletree Deakins. “It’s not a legal requirement, but it would be a good idea to review electronic communication policies and make sure it includes the use of symbols. I think it’s become prevalent enough that it would be a good business practice to do so.”

The Problem With Emojis in the Workplace

It seems far-fetched that tiny cartoons inserted into a text message or employee Slack channel could end up as evidence in an employment lawsuit for a company. But according to legal experts, emojis have appeared in cases more frequently in recent years.

“There have been numerous cases that involve the use of emojis as well as ‘likes’ on social media that involve claims of harassment. Such communications have been cited by employers as evidence of a hostile environment,” Scott McIntyre, partner at law firm BakerHostetler, wrote in an email. “Likewise, employers sometimes rely on such symbols used by employees in a positive fashion as evidence that a claimed hostile environment did not rise to a level required to constitute actionable harassment.”

Employment law experts agree that it’s the subjective nature of emojis that can create issues in the workplace. Simply put, emojis are a form of slang and will mean different things to different people.

“One issue I read about was the use of the hands-up emoji,” said Jay Holland, shareholder and chair of the labor employment and whistleblower group at law firm Joseph, Greenwald and Laake. “In our culture it means praise. But in China, if you’re doing business there, it’s offensive. It means stay away from me. If you were to use that in a work-related occasion in China, you’re accomplishing the exact opposite of your goals.”

The appearance of professionalism is perhaps the most basic concern for employers when it comes to emoji use in employee communications.

A recent survey conducted by Robert Half found that 39 percent of senior managers said it’s unprofessional to include emojis or emoticons in work communications, but 61 percent stated it’s fine in certain situations. When researchers from the California-based human resources consulting firm asked office workers how they feel about these symbols, 59 percent replied they never or only sparingly use them, while 41 percent send them at least sometimes.

Using emojis could imply “a lack of seriousness. It takes away from your message. It’s different from social media, which has a social purpose,” said Holland. “If you put an emoji in an email to your boss, I think the boss may not think you’re that serious of a person. It of course differs between cultures and person to person.”

Further, researchers at Ben-Gurion University of the Negev in Israel found that using emojis can increase the perception of incompetence. The 2017 study shows that contrary to actual smiles, smileys decrease perceptions of competence. “Perceptions of low competence in turn undermined information sharing. The adverse effects of smiley use are moderated by the formality of the social context and mediated by perceptions of message appropriateness.”

Although it’s possible the use of emojis can be interpreted as unprofessional, that doesn’t mean companies need to ban their use outright. Every company should have their own approach to how employees communicate with one another, according to legal experts. For example, law firms may have more formal expectations for their employees, while a tech startup may consider emoji use integral to their company culture.

“I wouldn’t suggest that every employer overhaul the handbook to make sure emojis are contained in their policies,” said Susan Wilson, attorney and co-lead of the e-law practice group at law firm Constangy Brooks, Smith & Prophete.

Wilson however, recommends that any policies regarding emoji use be consistent with company social media and code of conduct policies, meaning employees should be reminded that communication should not reflect poorly on themselves or the company.

“Whether we’re talking about Facebook, Twitter or even LinkedIn, it’s important for these policies to link to the company’s code of conduct, including sexual harassment,” said Hughes.

Using a smiley face or a winky face at the end of an email to lighten the tone or emphasize a joke does not necessarily qualify as sexual harassment. However, if communications between the harasser and the victim contain emojis, the pervasiveness or severity of the emoji use could be evidence of a hostile work environment.

“It could be evidence of intent to harass, to start a relationship outside of the normal workplace relationship,” said Holland. “One element of a hostile work environment claim is pervasiveness. If a harasser is regularly using emojis and upping their game, so to speak, from smileys to hearts to kissy faces, that’s evidence of workplace hostility. It’s happening. I see it happening.”

Sexual harassment is prohibited under Title VII of the Civil Rights Act of 1964, which protects against employment discrimination based on race, color, religion, sex and national origin. Although the law doesn’t prohibit simple teasing, offhand comments or isolated incidents that are not very serious, harassment is illegal when it is so frequent or severe that it creates a hostile or offensive work environment or when it results in an adverse employment decision, according to the Equal Employment Opportunity Commission.

In light of numerous sexual harassment and assault allegations against Harvey Weinstein and other Hollywood executives, NBC News and The Wall Street Journal conducted a poll that found 48 percent of women currently employed in the United States say that they have personally experienced an unwelcome sexual advance or verbal or physical harassment at work. Furthermore, the October 2017 poll found that 67 percent of Americans believe sexual harassment happens in most or almost all workplaces.

Holland said emojis in employee communications represents the highest risk as evidence in a lawsuit like a workplace sexual harassment case.

“These are issues that wouldn’t have been thought of only a few years ago. But they are,” said Holland. “Employers should get on the curve here, they’re not ahead. Well behind, in fact. They need to understand these issues and create policies to prevent these issues.”

Ogletree Deakins’ Hughes agrees. In recent years, she has seen an increase in sex harassment stemming from email and text messages. And now that emoji use has proliferated, she has also seen the symbols being used to convey inappropriate thoughts from one employee to another.

“I think it’s absolutely correct that emoji use — and social media in general — has really exacerbated the sexual harassment issues we see. It’s not just in sexual harassment cases, but that is where I’m seeing most of it,” said Hughes.

David Morrison, a principal of the litigation and labor & employment groups at law firm Goldberg Kohn, disagrees with the prevalence of emojis in workplace sexual harassment cases. And although they still possess a novel quality in the personal lives of many, he doesn’t view emojis as particularly disruptive to the employment law field. From his perspective, the message may now contain cartoon faces, but the behavior is still harassment.

“I think these are all subsets of the same policies that companies have had in place for years,” said Morrison. “Those policies tend to say, ‘Don’t download vulgar things from the internet,’ ‘Don’t circulate vulgar jokes.’ The internet probably created a need to make sure companies were making policies about content we weren’t accessing at work previously. Before the internet you had the classic example of a calendar in a locker room or something like that. When the internet allowed all that content to come into the office, companies had to deal with those problems.”

Preventing Liability With Training and Compliance

It was estimated that emojis were used by 92 percent of the world’s online population in 2.3 trillion mobile messages in 2016, according to a report published by Emogi Technologies Inc., a New York-based mobile messaging company. The report also argues that emojis are the fastest-growing language worldwide.

Love them or hate them, emojis are here to stay, which may present challenges to HR departments trying to prevent sexual harassment if their senior executives are not familiar with the latest double meanings of some emojis. It’s inevitable that there will be some employers who are still confused by emojis, according to experts.

“Sometimes it’s obvious, sometimes it’s not,” Hughes said. “In sex harassment, we often see fruit representing different body parts. It may be innocuous to people who don’t understand. It can expose companies to liabilities if they’re being used inappropriately.”

As with most everything, there is a rule of reason and proportionality, according to employment law experts. When it comes to updates to the employee handbook concerning emoji use in company communications, people ought to be informed of any new policy, and be given the chance to get used to it.

“An isolated use of emojis or violations of any kind, if they’re minor they should be treated as such. Any punishment should depend on the seriousness of the offense,” said Holland. “If there’s an individual using graphic or offensive emojis, that’s pervasive and that’s a hostile work environment. Something like that needs to be treated with the seriousness it deserves.”

Max Mihelich is a writer in the Chicago area. Comment below or email editors@workforce.com. 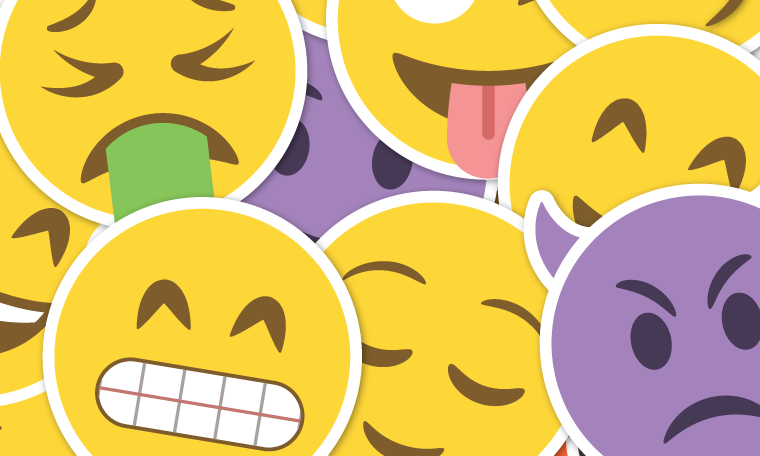