For Same-Sex Couples, Rules Are Hardly the Same

When New York’s Marriage Equality Act went into effect in July, same-sex couples lined up in their wedding finery at the city clerk’s office. The marriage law was cause for great celebration, especially for gay and lesbian couples working in New York, where state law already recognized same-sex marriages that were legal in five other states, as well as in the District of Columbia and several other countries, including Canada.

But to many couples, the law was more a symbolic victory than anything else. Some couples hoping for legal recognition have pledged to hold off on marriage until both state and federal laws are in sync.

“These marriages, in whichever state, are what I call ‘feel-good marriages,’ ” longtime gay activist Larry Kramer said in a statement he released to The New York Times after the law was passed. “Most straight people who are congratulating us so effusively don’t understand that these marriages share none of their federal benefits and entitlements, the right to inherit without punishing taxation, the right for our joint incomes not to be taxed so hideously high, the right to share insurances. … So why do we continue to get so excited when so few worthless crumbs are thrown our way?”

But change could come at the federal level. The Defense of Marriage Act, or DOMA, signed into law by President Bill Clinton on Sept. 21, 1996, defines marriage for all federal purposes as being between one man and one woman. Thus, on the federal level, same-sex marriage simply does not exist, although the law is being challenged on many fronts, notably through the Respect for Marriage Act. Essentially a repeal of DOMA, it was introduced in both the House and Senate this March. Senate hearings began in July. If DOMA is thrown out, the definition of marriage would be left to the states.

In the meantime, employers must deal with the growing number of state gay marriage and civil union laws. When New York legalized same-sex marriage, some businesses were ready with changes in their employee benefits programs. Others, however, might be encountering some surprises, or at least a few bumps along the road, while attempting to adjust to the differences in state and national laws.

“The incongruity between state and federal law regarding the definition of ‘spouse’ has the potential for creating confusion among plan participants and costly administrative errors,” writes Christine Lutgens, co-chairman of the Employee Benefits and Executive Compensation Department at the New York City law firm Kramer Levin.

Corning Inc., which has provided benefits to same-sex partners of employees since 2002, also will now require its New York workers to marry by Jan. 1, 2013, to keep the benefits. In a written statement, it said that: “Since its inception, the policy has stated that, in U.S. states where legal marriage for same-sex couples is permitted, couples must be married for an employee’s partner to be eligible for coverage.” Requiring same-sex couples to marry to retain their benefits is short-sighted, says Chris Crespo, Lesbian, Gay, Bisexual, Transgender and Allies Inclusiveness strategy leader at Ernst & Young. She says a conversation on the same topic was held several years ago at Ernst & Young. The firm decided to keep the domestic partner label and benefits, established by the company in 2002, even though foreign- and state-sanctioned same-sex marriages were honored within the company.

Similarly, Eastman Kodak Co., with headquarters in Rochester, New York, in July issued a written statement affirming that domestic partner benefits, offered to both same-sex and opposite-sex couples, would remain intact. The new law “should have no significant impact on benefits that Kodak provides,” the company wrote.

“For benefits and insurance policies, it’s still considered domestic partnership, even though our systems and our people may recognize it as marriage,” Crespo says. “Legally in New York, it’s recognized as a marriage. For federal governmental benefits purposes, it’s not a marriage.” That means, of course, that in the eyes of the Internal Revenue Service, same-sex spouses cannot be afforded the same tax considerations as opposite-sex spouses. Although DOMA doesn’t require companies to limit coverage, they are required to treat as taxable income the value of insurance coverage provided to a domestic partner or same-sex spouse, unless that person qualifies as a dependent.

“My partner is covered by Ernst & Young,” Crespo says. “The value of her benefits is imputed income to me, and I pay tax on it. That tax on average is about $1,200 per couple. So essentially I pay $1,200 more per year because I have a domestic partner instead of a spouse on my health care.”

More and more companies are providing a gross up on the imputed income tax, she says, compensating the employee for taxes incurred in order to offset the burden. Still, employers then must pay payroll tax on the higher income.

“It may be cheaper for each partner to carry their own coverage than it would be if one of them elected family coverage and covered the partner through the family coverage,” Lutgens says in an interview.

Consequently, Lutgens notes, it’s vitally important that employees name their beneficiaries specifically by name, rather than assume that a same-sex spouse will automatically be considered the beneficiary.

The Obama administration extended benefits of the federal Family and Medical Leave Act to include children and dependents of domestic partners, though the spouse cannot be included under the law. “Some companies will voluntarily extend FMLA-type leave to employees based on the needs of their domestic partner or same-gender partner or spouse,” says J. Kevin Jones, deputy director for Out & Equal Workplace Advocates in San Francisco. “But there’s no requirement under the regulations.”

Jones says that the patchwork of same-sex marriage laws in America makes things even trickier for companies that do business in multiple states. “It gets a little more complicated if you’re looking at talent mobility,” he says.

In a worst-case hypothetical scenario, he points out the havoc that could be wreaked when a same-sex couple married in New York moves to, say, Texas, after one partner is transferred for work. What if, Jones continues, the relationship splinters and the couple decides to divorce? Their marriage was never even recognized in Texas, but in order to divorce in New York, they would have to re-establish residency and live there again for at least 90 days—while employed in Texas, he says.

Another scenario he envisions has an American employed with an international corporation and legally married to another man in, for example, Spain. The American partner could be transferred to a stateside office, but in the eyes of the U.S. Citizenship and Immigration Services, his spouse has no legal relationship to him.

“This is becoming a business issue,” Crespo says. “For many years, companies saw this as a social issue that they wouldn’t get involved in and wouldn’t touch. But it is costing companies real money now.”

Susan Hauser is a freelance writer based in Portland, Oregon. 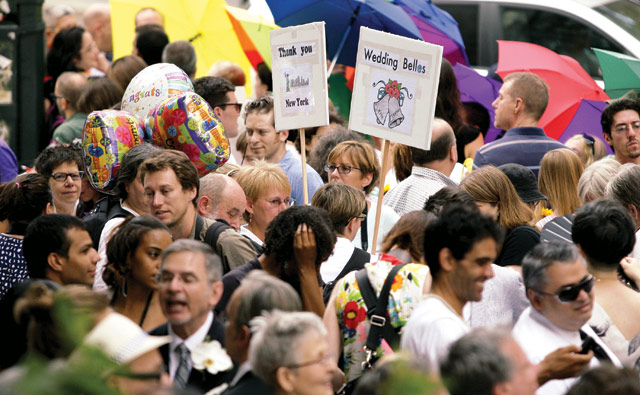