Finding Solutions: This Is What the Interactive Process Is Supposed to Look Like

Last week, my son Donovan turned 9. Since we were in California during his birthday, we’ve had a bit of a delayed celebration back home. Since D-man has Celiac Disease and cannot eat anything with any gluten, he wanted an ice cream birthday cake. For him, however, ice cream can be tricky. Even if the ice cream itself contains zero gluten in its ingredients, it can still make him ill if it becomes cross-contaminated.

Enter Mitchell’s Homemade Ice Cream (which is not only Cleveland’s best ice cream, but also happens to be some of the best ice cream anywhere). Mitchell’s takes its allergens seriously. All you have to do is mention a gluten allergy, and the servers know exactly what to do to eliminate any risk of cross-contamination.

They not only sanitize the scooper, but also open a fresh, untouched container of the flavor-of-choice. For these reasons, we have as much confidence as one reasonably can have that Donovan can enjoy his ice cream without ingesting any accidental gluten.

When we celebrated my daughter Norah’s birthday in May, we also ordered an ice cream cake from Mitchell’s. At that time, we advised of the gluten issue, and they prepared the cake with zero cake base, all ice cream.

Since May, however, Mitchell’s has discontinued its prior practice of gluten-free, ice-cream-only cakes. Thus, when we called earlier this week to order Donovan’s cake, the response was, “We don’t do that anymore.”

Unwilling to accept “no” for an answer, I asked for the store manager to give me a call. He explained that his hands were tied, and that corporate decided that a missing cake base allowed for too many irregularities in shape. Thus, no more gluten-free cakes.

Still unwilling to accept a flat “no”, I asked for the phone number of Pete Mitchell, one of the company’s founders, owners, and executives. With phone number in hand, I left a message for Pete, explaining my dilemma, asking that he make an exception for Donovan. Within a couple of hours, the store manager with whom I had previously spoken, Adam, called me back.

He said that Pete Mitchell had received my message while on. Pete called Adam, and they discussed a possible solution, which Adam relayed to me. Instead of making a gluten-free cake, they could clean and sanitize a pie tin and craft a gluten-free birthday “pie”.

And, an employment-law lesson to boot. When dealing with a disabled employee, the ADA requires that you engage in what is called the “interactive process”. This process is one of communication and cooperative problem solving; you must talk to your employee to identify appropriate reasonable accommodations and implement one, if available and without imposing an undue hardship, that will enable the employee the perform the essential functions of the job. The failure to engage in this interactive process (even if you view it as an act of futility) is, in and of itself, a violation of the ADA.

Don’t take the easy way out with your disabled employees when they ask for accommodations. Talk to your disabled employees and see if there is an available solution. Even if you are legally right (and, the odds are good that you won’t be), you will leave the employee feeling offended and upset. Those feelings breed discontent, which, in turn, breed lawsuits.

It would have been easy for Mitchell’s to keep saying “no” until I went away. Thankfully it didn’t, and crafted a solution that fit within its new policy and provided Donovan the gluten-free ice cream cake he wanted.

So thank you Pete Mitchell and Adam, the Strongsville store manager, your flexibility and accommodating nature made a 9-year-old boy very happy. 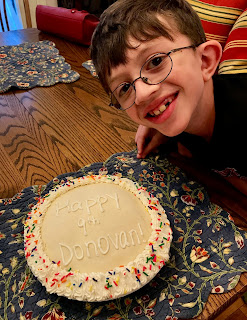