Feds Consider Taking Ex-Offenders Out of the Box

When Tirzah Kemp was arrested in 1999, she was afraid of what she could lose. Taken into custody on first-degree assault charges after a domestic dispute with her then-boyfriend, Kemp, whose son was 2 at the time, was afraid she would go to jail and that her child would be taken away from her.

She never dreamed her livelihood might be permanently affected as well.

Kemp, who ultimately pleaded guilty to second-degree assault, is just one of about 65 million U.S. adults with a criminal record. She is also one of possibly millions of people whose record has come back to haunt her in her professional life after her sentence was served.

With nearly 1 in 4 adults in the U.S. having a criminal record, there is a call by civil rights organizations, politicians and some employers to change Equal Employment Opportunity Commission guidelines to “ban the box”—the portion on a job application asking candidates to reveal details of their criminal history during the application process.

The EEOC this past summer held a meeting on whether to ban the use of criminal records for employment screening purposes on a federal level. The commission has yet to release an opinion.

But some states already are independently changing their guidelines. According to the New Haven Prison Reentry Initiative, Connecticut in June 2010 became the fourth state after Minnesota, New Mexico and Hawaii to enact ban-the-box laws for state jobs.

The laws allow employers to ask about criminal history once they’re face to face with applicants and don’t prohibit background checks. However, ban-the-box supporters say eliminating the question on applications gives job candidates an opportunity to get an interview and explain their past.

Boston, Chicago, Philadelphia, San Francisco and Seattle are among the cities that have enacted ordinances prohibiting employers from requiring job applicants to disclose their criminal backgrounds until after the first employment interview. After the initial interview, employers may perform a background check or request the disclosure of an applicant’s criminal history.

Some companies are voluntarily changing their policies as well. The YMCA of Greater Rochester, New York, with 15 locations, has been hiring those with criminal convictions throughout its association since the 1970s, despite the fact that Rochester does not have ban-the-box guidelines.

According to Fernan Cepero, vice president of human resources, while the YMCA has the criminal record question on its application—a requirement to be a licensed child-care provider—checking the box does not preclude past offenders from being considered.

“What we look at is whether the conviction is relevant to the position,” he says. “Ninety-nine-point-nine percent of the time it isn’t.”

While Title VII of the Civil Rights Act of 1964 prohibits selection policies or practices that have a disparate impact on protected classes of people, like minorities and the gay and lesbian community, using a person’s criminal record in the recruiting process isn’t, in and of itself, a violation of Title VII, according to Elliott Bronstein, public information officer for the Seattle Office for Civil Rights.

Since a disproportionate number of people of color have criminal records, Bronstein says, the use of these kinds of background checks to screen candidates for employment is at heart a civil rights issue.

“The effect of the use of widespread criminal record checks in employment has the effect of hanging out a sign that says, ‘African-American and Latino candidates need not apply.’ And that is chilling. The consequences are beyond huge,” Bronstein says.

What ban-the-box advocates hope to do is to reduce unfair barriers to employment for people with criminal records in both the public and private sectors.

New Haven, Connecticut—where Kemp lives—adopted the new ban-the-box guidelines in 2010 to reduce discrimination against those with felony and misdemeanor convictions. Before the guidelines were adopted in New Haven, Kemp was searching for work without success.

“I was very immature,” Kemp says of her arrest at age 22. “I was terrified of what was going to happen to me. I had never had a brush with [the law] before, and I was extremely ignorant to the criminal justice system and to the collateral consequences of pleading out. I had no concept of what that would mean for my life.”

In a bad relationship and in fear of losing custody of her young son, Kemp says she decided that accepting the plea agreement, which would keep her out of prison, was the right decision.

Following her plea, Kemp’s problems seemed behind her. She went back to work as a medical receptionist, had another baby and believed her legal problems were in the past. When she lost her job several years later, the assault conviction on her record finally caught up with her.

Kemp says that she applied for 20 to 30 jobs in her field and was optimistic. Armed with referrals and good references, she landed interviews and felt that she performed well. Then, one by one, the companies stopped taking her calls. Each time it was the same thing.

“Two or three days later I would get the letter in the mail, either saying that they went with someone more qualified or with a copy of my background check as an explanation of why they didn’t hire me,” she says. “That’s when I started realizing the difficulty with having an assault on my record. I had thought that my character, the way that I spoke, my intelligence and my work ethic would be enough to get me another job. It didn’t dawn on me how much my conviction would make the ultimate decision.”

Feeling defeated, Kemp gave up on a job as a medical receptionist and enrolled in a training program in the hopes of reinventing herself.

“I hoped that if they got to know me, perhaps they would refer me to someone else who would take a chance on me,” she says.

It’s a common theme for those with criminal records, according to Roberta Meyers-Peeples, director of the National HIRE Network, a public policy, advocacy and technical assistance project that is part of the Legal Action Center, a New York-based not-for-profit organization. HIRE stands for Helping Individuals with criminal records Re-enter through Employment.

“We were founded in 2001 to respond to the employment barriers faced by people with criminal histories,” Meyers-Peeples says.

In a down economy when hiring managers are getting dozens and sometimes hundreds of applications for a single position, there is a weeding-out process, Meyers-Peeples says. A common first step in that process is to reject applications of candidates who have indicated that they have a criminal history, thereby creating a pool of ex-offenders whose qualifications will never see the light of day.

“Companies are understandably wary of hiring a person with a criminal background because of the possibility of negligent hiring lawsuits being filed that could cost companies a lot of money,” Meyers-Peeples says.

Many negligent hiring lawsuits brought against companies are related to inappropriate background checks, she says.

“We advocate for companies to do thorough checks, just later in the process,” Meyers-Peeples says. “We also advocate candidates to be honest about their history. And if something does come up, we’d like this community to have the opportunity to show the steps they have taken to improve themselves.”

What ban-the-box offers past offenders is a chance to be considered on a level playing field, according to Madeline Neighly, staff attorney for the National Employment Law Project. “It would prevent employers from asking about past criminal convictions until after their qualifications had been reviewed and would only allow those convictions to be considered in the hiring process if they were directly related to the job at hand.”

Neighly says a recent driving under the influence conviction would likely prevent an applicant from being considered for a job as a city bus driver, while a 10-year-old shoplifting conviction would not.

“This allows people to be judged on their merit rather than being excluded summarily for something potentially not job-related,” Neighly says. “By taking off the box that says, ‘Have you been convicted of an offense?’ folks aren’t out of the gate going to be dismissed.”

When criminal history is a deciding factor in an applicant’s employment, it isn’t just the job seeker who loses. By delaying the introduction of an applicant’s record until later in the process, employers have the chance to broaden their pool of qualified employees.

According to Virgil Fisher, senior executive at WeRecycle, an electronics recycling company based in Mount Vernon, New York, ban the box isn’t a bleeding heart-issue but a sound business decision.

“We look at the workforce as a global economy and it is going to take everybody, including those with criminal records, for us to make businesses in this country profitable again,” he says. “I think that cutting a whole group of people, people who could help move the economy forward, makes no sense to me.

“I don’t want folks to look at what we are doing as a human interest story because it is not. This is selfish and about getting the best talent for the job. If you want the best, you can’t afford to overlook anybody.”

Waiting to do a background check may also save companies money. According to Neighly, at the July 26 EEOC hearing on ban the box, Rob Shriver, senior policy counsel at the federal Office of Personnel Management, testified that waiting to do an investigation into an applicant’s background until after a conditional offer has been made would reduce expenses and wasted time for employers.

Kemp, who completed a job training program, began volunteering for and eventually landed a job at the job training facility, but the road to employment was arduous. It wasn’t until ban the box was in place in her community that she was able to land her current position last year as the community grant organizer for the New Haven Prison Reentry Initiative.

Her record never came up during the interview process.

“Without ban the box, I think I would still be held back,” Kemp says. “And I am one of the lucky ones. Many people don’t have the opportunities that I have had to network and meet people and build a supportive following. There are individuals that might be fantastic workers but because of their backgrounds they can’t market themselves.

“When I was arrested, I was in a bad situation. I made a poor choice, and I take full responsibility. I just needed the chance to prove that the arrest does not reflect who I am.”

Heather O’Neill is a freelance writer based in San Francisco. To comment, email editors@workforce.com. 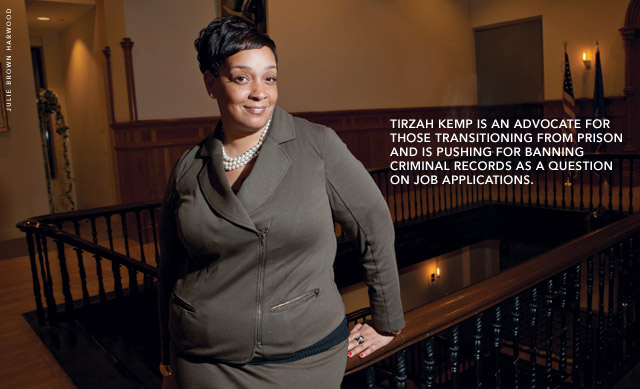