The Awesome Influence of Women in HR

Organizations are transforming how they manage their workforces, and women in C-suite human resources positions are leading the way.

As you read each profile, you’ll see how these women are ending formal annual performance reviews, closing the wage gap, improving gender parity and diversity, and increasing employee engagement, among other initiatives.

It’s also the only leadership role that is predominantly female. Seventy-three percent of HR practitioners at the manager level are female, according to 2015 Bureau of Labor Statistics data, compared against 43 percent in marketing and 27 percent in IT.

Although the numbers dwindle at the highest level of HR, women still hold an employment edge when compared to their male counterparts. CEB, a best practice insight and technology company, analyzed 382 HR executive appointments between 2011 and 2016 and found that 55 percent of these new hires are female. This coincides with separate data from executive search firm Korn Ferry, which found that from a sample of top 1,000 U.S. companies, 55 percent of CHROs are women.

Some women managing these changes are well known. One is IBM CHRO Diane Gherson, who helped Big Blue end performance reviews based on stack-ranking employees. Another is Kathleen Hogan, the Microsoft human resources executive vice president who in 2016 closed the gender pay gap at the company so salaries for women are 99.8 cents for every $1 earned by men.

But people management power players are as likely to work at enterprises with fewer than 5,000 employees as they are to head HR at companies with hundreds of thousands of workers.

Workforce contacted professionals at business schools and HR associations, along with six female CHROs, to explore the position further: Why are women faring better in this field than others? What roadblocks still exist? And what does the future of HR look like?

Despite the fact that the equality of the position in terms of gender is unparalleled in other fields of business, there’s still ample room for improvement, said Bill Greenhalgh, CEO at the Human Resources Professionals Association. Male HR managers make about 40 percent more than female HR managers, according to the 2014 U.S. Department of Labor statistics, and in 2013, only 11 out of the 50 highest-paid HR leaders were female despite the fact that it is a female-dominated profession.

Regardless of company size, the women profiled here exemplify how HR and CHRO roles have evolved over the past decade. A competitive job market and technology advances have seen the function shift from practical and administrative to strategic.

Still, there remains the so-called “glass elevator,” said Matthew Bidwell, associate professor of management at the Wharton School at the University of Pennsylvania. That is, men tend to fare better in female-dominated roles than females in male-dominated jobs.

“What you see in female dominated industries is they become progressively less female as you rise up [the career ladder],” said Bidwell. “Our stereotype of a manager or a leader is too often a man.”

“There’s a great opportunity here, because female CHROs spend more time in that area,” he said. “It’s an area where they can really add value.”

Just as the field of HR is shifting to become more strategic, HR leaders are moving in the same direction. When HR was more people and process driven, the cliché of an HR practitioner generally had those stereotypically female traits, like caring about other people and being communal. Now, as HR leaders gain more strategic and analytic roles, the skill set needs to be successful in shifting as well.

“This has implications for the profile of HR people,” said Bidwell. “The people who will do the best will have a combination of [these skills]. We’re looking for people who blend the understanding of how people work and also have the ability to analyze and understand data and make data-driven decisions.”

The female CHROs showcased in this feature represent a variety of industries, company sizes and business challenges, and they have that unique blend of people and strategic skills that HR professionals need to succeed in the modern workplace.

Read about the Women of HR highlighted in our January/ February issue: 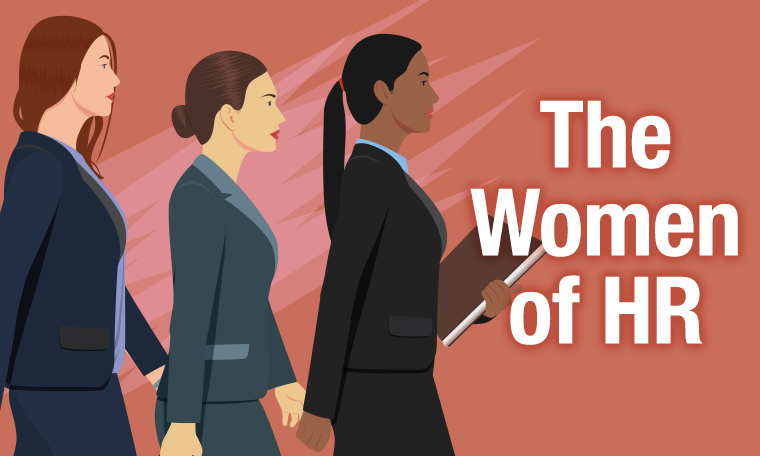