The workplace is not immune to the impact of childhood trauma

There is increasingly a greater understanding that one’s work life impacts their personal life and vice versa. The two do not exist in separate bubbles.

Adverse childhood experiences — potentially traumatic events that occur in childhood — can impact how people cope with stress, how their brains develop and how much risk they have toward certain health issues, according to the Centers for Disease Control and Prevention. ACEs include violence, abuse and growing up in a family with mental health or substance use problems. While 61 percent of adults in the U.S. have at least one ACE, 16 percent have at least four.

Even though ACEs occur long before people enter the workforce, they’re still relevant to a person in adulthood. And employers can take certain steps to create a “trauma-informed workplace,” said Kate Daugherty, community impact director at Hopeworks. Education management company Hopeworks has been trauma-informed since 2012, and Daugherty leads the Youth Healing Team, which trains other organizations in how to have this culture.

The Youth Healing Team has led training for schools, health care organizations and nonprofits, but this type of knowledge is useful for people in any industry, Daugherty said.

The City of Baltimore had the team provide training on the weekend of Feb. 8-9, when Mayor Jack Young signed the Elijah Cummings Healing Act, officially making Baltimore a trauma-informed city. The bill requires the city to train employees on trauma-responsive and trauma-informed care and services.

City Councilmember Zeke Cohen sponsored the bill. Cohen, who is also Chairman of The Education & Youth Committee, recounted a mass shooting in his district, the First District, in which four people were shot and two people were critically injured. The mass shooting took place at 3:45 in the afternoon, when two different schools were dismissing. Many children witnessed the mayhem.

“The thing that was perhaps most disturbing to me is when I went to visit one of the schools the next day, there was no additional support. No clinicians, no crisis response team. It just happened,” he said. “And what we know about trauma and the brain is that unless treated, that exposure to violence can have an indelible impact on the long term health outcomes and well-being of young people.”

On another occasion, a group of high school students whose school recently had a school shooting approached the education committee and challenged them to work more on reducing trauma, Cohen said. The committee worked with the students on the bill to make Baltimore a trauma-responsive city.

Interestingly, Cohen said, one type of business helped create a groundswell of support for this bill: Barbers and beauticians. In some Baltimore communities, people of color distrust getting psychiatric care in the hospital or health care setting because of mental health stigma, Cohen said, and barbers have become the unofficial clinicians of these communities. They cut the hair of and have conversations with people who may be the victims or shooters in mass shootings.

The support of businesses like barbers and beauticians was important to the cause, Cohen said.

“Even if the bill is great, if we don’t have a groundswell of people and organizations standing with it, we’ll miss an opportunity,” he said.

Part of the training which Hopeworks provides organizations and the city of Baltimore is learning about buffering factors, Daugherty said

People with ACEs may develop coping skills that got them through traumatic times in the past, but those skills aren’t appropriate for a professional setting, she said. And employers shouldn’t demonize employees for their coping skills.

She gave the example of a Youth Healing Team employee who was a smoker. Upon talking to him, they found out that he liked having that opportunity to stop and breathe. The Youth Healing Team suggested that, when he was stressed, he try standing still and taking 10 deep breaths. Then, he could reassess how he was feeling and decide if he still felt like he needed to smoke.

“Sometimes it worked and sometimes it didn’t, but slowly over time we started to see that he needed to use that adverse coping skill less and less often,” Daugherty said.

Cohen stressed the importance of continued support of individuals, nonprofits and businesses if this bill that encourages Baltimore to train its employees to be trauma-responsive is to remain durable. Different organizations and nonprofits tend to operate in silos.

“What’s been gratifying to me about this work has been to have all these organizations working collectively. It’s been exciting,” he said. “It’s hard for a number of reasons for organizations to think about collective impact outside their own institutional needs.” 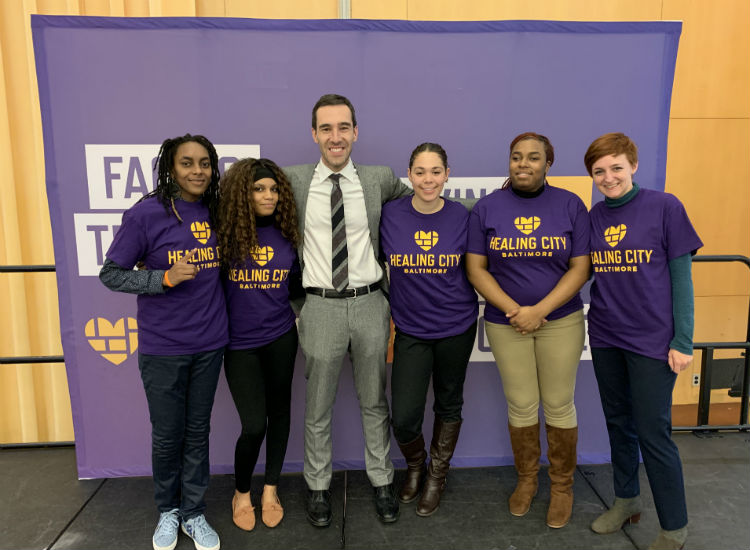