As an executive recruiter for 17 years, Amy Rueda has tried most every form of technology to find the best talent.

Starting in the profession when paper résumés and face-to-face interviews were the norm, Rueda, director of strategic talent management for UCLA Development, adopted videoconferencing when it became popular in the 1990s. She soon discovered that although videoconferencing cut travel expenses and was more convenient, it was pricey since it required specialized equipment and location.

It took her nearly a decade to find the technology that offered the right balance of convenience and cost. After being appointed to her position at UCLA in 2007, Rueda knew she had to implement video interviews as a key part of the university’s recruiting strategy. But finding the right fit took time, as well.

She spent a year researching her options and testing products before finally selecting GreenJobInterview, based in Costa Mesa, California, in 2008. The company’s product promised to be secure, affordable and required no special equipment beyond a webcam, a feature that is built into many new computers. Since incorporating online interviews, Rueda says she has cut spending from about $10,000 per search to roughly $500.

“The technology of interviewing candidates has come a long, long way, and video interviewing is one of the most useful tools recruiters have at their disposal,” Rueda said.

With the economy still struggling and companies having to do more with less money, this type of savings—time, money and resources—is considered substantial. According to a soon-to-be published report by Mollie Lombardi, research director of consulting firm Aberdeen Group, video interviews are gaining popularity.

In a survey of 506 companies, cost was a motivator for companies to adopt the technology, with 67 percent citing the reduction of travel expenses as a draw for them. Forty-seven percent use video interviewing to shorten the time it takes to make a hire, and 22 percent say that they would use video interviewing to help them reach candidates from other geographic regions.

While the technology is cheaper and more efficient, it’s a method that some love and others contend is rife with legal land mines. Video interviewing technology may be useful and financially beneficial, but employment lawyer John Chun with the Summit Law Group in Seattle advises clients to proceed with caution when using it.

“Video résumés are not necessarily riskier than face-to-face interviews, but a talking head on a video does offer more information about a candidate than even a photograph might,” he said. “A video can give the viewer clues to the candidate’s class, race, nationality and can also potentially reveal any disability the candidate might have.”

Chun suggests adopting a screening process that requires the use of a paper or electronic résumé as the first tier of consideration before video is introduced. Whether it is on the beginning or end of the hiring process, he said companies need to create a set of objective qualities, like education, experience, writing samples, references and test results so that if candidates are rejected, there is a reason.

He also recalls a time when attaching photographs to a résumé was discouraged because of the potential for discrimination.

“As people get more comfortable presenting themselves on video, virtual interviews are going to become the norm,” he says. “I don’t think it can be stopped. It matters more now how companies are going to deal with it and what steps they can take to protect themselves.”

While Chun sees the potential for problems, to the best of his knowledge, no lawsuits have been filed that involve discrimination related to video interviewing.

Colleen Aylward, an executive recruiter and creator of the video interviewing tool Interview Studio, was an early adopter of the technology. As founder of the executive recruiting firm Devon James Associates Inc., based in Bellevue, Washington, Aylward felt the pushback, too.

“Hiring managers, like it or not, are human, and people worried that they might make judgment calls on a candidate based on what the person looked like,” she said. “The other side of the argument is that the only reason you bring a candidate in for an interview in the first place is to see how they speak, how they carry themselves and whether they will be a match for your company’s culture. We argue that rather than have a candidate travel for a face-to-face interview, these same observations can be made through a short video clip.”

Video interviewing vendors began popping up in the mid-2000s in response to the cost of videoconferencing and the headache of travel. Before the terrorist attacks of Sept. 11, 2001, recruiters would normally fly into a city and interview local candidates in airport lounges. That became impossible when airport security laws stopped allowing nonticketed parties past security.

Greg Rokos, who co-founded GreenJobInterview in 2007, was among those who saw the post-Sept. 11 recruiting issues as a business opportunity. An executive recruiter for 20 years, Rokos—like Rueda—had experienced the inefficiencies of job interviews.

“In my practice, I was amazed by the waste surrounding first-round interviews,” he said.

In addition to the cost of flights, hotels and meals for candidates who often were not a good fit for the company, Rokos was bothered by the environmental impact of the practice. Videoconferencing, he said, was problematic for different reasons.

“While it was more convenient than flying, there were drawbacks—namely that the candidate had to travel to a videoconferencing center, which sometimes took hours depending on where they lived,” Rokos said.

In addition to the expense—up to $500 an hour—the technology didn’t allow for multiple connection points, so executives from various branches couldn’t sit in on a single interview. And, since most videoconferencing centers were merely hosting the interview and were not the actual provider of the video transmission, technical support was lacking.

“I saw a dramatic need for improvement in video technology specific to job interviews,” Rokos said.

While GreenJobInterview provides real-time virtual interviews, companies like Active Interview, based in Cambridge, Massachusetts, allow organizations to utilize video interviewing in other ways. Asynchronous interviews—interviews that are recorded by the candidate, then viewed later by the recruiter or HR representative—allow companies to sidestep the problem of scheduling multiple preliminary interviews by allowing the candidate to record their responses to a series of preset questions.

Companies can create custom questionnaires, and those questions are presented to the candidate on their computer screen. The candidate then presses the record button to tape a response.

Sandeep Ghael, co-founder of Active Interview, says there are benefits to using this tool in the recruiting process.

“The candidate can do the video at their leisure, and the company can view their responses when it is convenient,” he said. “It makes the process more collaborative because an entire team can view the same video and score them, rate them and share them with each other.”

While some contend that video interviewing could open the door to a lawsuit, UCLA’s Rueda says it’s an unnecessary worry.

“We are in a time where we all have to strive to be our best while being very careful with our resources and how we use them. Video interviewing is an amazing money-saving and time-saving tool.” 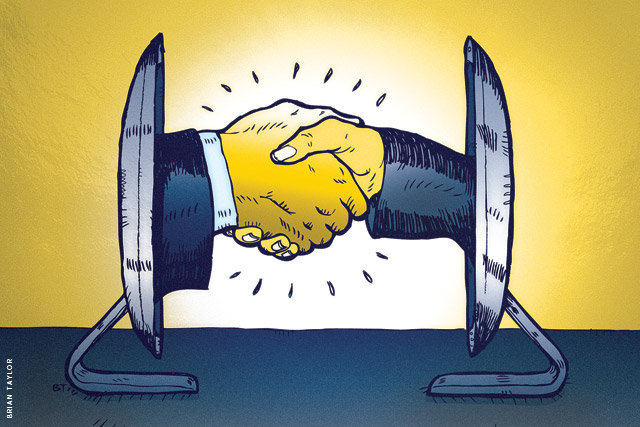