The Centenarians Cometh: Working to 100 and Beyond

As you know, age is increasingly becoming an issue in the workforce. Many baby boomers who are approaching retirement age aren’t looking to pack up their desks anytime soon—whether by choice or by necessity.  Working into your late 60s or early 70s is one thing, but working until 100 or beyond? That’s crazy talk, right?

I recently came across a headline that caught my attention: “Beloved Library Staffer, 100, Died of Carbon Monoxide, Smoke Inhalation.”

Tragically, Opal Reifenberg lost her life not from old age but from a fire that broke out in her home a few weeks before her 101st birthday. Indeed, according to the story, she had worked as a librarian at the Wilmette, Illinois, Public Library for almost 25 years, meaning she took the job in her mid-70s, a time when most people are well into their retirement. At the time of her death, she still worked 15 hours a week.

Today, people are living longer than ever, and that trend isn’t likely to reverse itself unless the obesity and diabetes epidemics get even worse.

Earlier this summer I saw a sign advertising Prudential insurance that provocatively said, “The first person to live to 150 is alive today.” Perhaps. But once you get past the obvious questions like: “Who would want to live that long?” you might start to think, “What if I live that long?”

It’s possible that working until 100 and beyond will become more common and maybe even inevitable if the government can’t figure out how to fund Social Security come 2040, people don’t start planning ahead for retirement and citizens continue to live longer, healthier lives.

According to a U.S. Census Bureau report issued in 1999, the projected number of people living to 100-plus is projected to rise to a surprising 265,000 by 2050. Even if only 5 percent of those people remain in the workforce, that’s still more than 13,000 workers over the age of 100 punching the clock at least a few days a week.

Of course, that’s assuming companies will hire or keep people that age on staff. There were just under 23,000 age-discrimination claims made with the Equal Employment Opportunity Commission in 2012. Who knows what that number might jump to in 2050? I could just hear a hiring manager in an interview say: “Says here you were a project manager, um, 50 years ago. Seriously? Next …”

It caught me off-guard at first that someone Reifenberg’s age would still be working, but perhaps it shouldn’t have. She was not alone as a hundred-something in the workforce. People like Reifenberg, Rosa Finnegan and Jim Clements all kept working and are continuing to work after hitting the century mark. My great-great-aunt Rose lived until almost 103, according to government records—although our family thought she was four or five years older than that—and while she didn’t work later in life, she was very active until the last couple of years of her life.

People are living longer, and the workforce is going to have to accommodate that. For some people, working and being active is like the fountain of youth. It keeps them young.

And who could argue with the man who played God?

James Tehrani is the director of content strategy at FlexJobs. 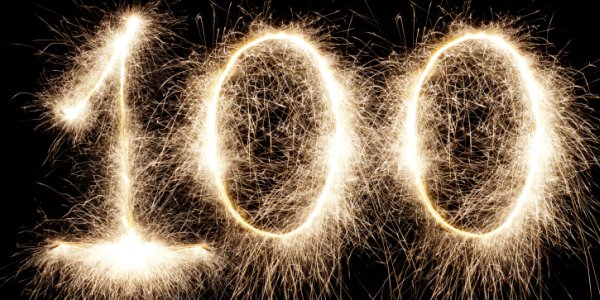