Mental Health Takes on New Meaning for Millennials at Work

Those born between 1978 and 1999 are also struggling with depression in greater numbers — more so than other generations in the workforce, according to a 2013 survey by the American Psychological Association. Given that millennials make up the largest segment of the U.S. workforce, employers have reason to be concerned, according to Mike Thompson, mental health advocate and president and CEO of National Alliance of Healthcare Purchaser Coalitions.

“Considering how important millennials are to the current and future makeup of their workforce it’s critical that employers address their expectations and needs,” he said. “The fact that depression rates among young adults could be increasing should be highly alarming.”

In fact, between 2005 and 2014 the number of depressed teens jumped by more than half a million, according to a recent study in the Journal of Pediatrics. Many seem to be bringing these struggles to work.

According to the American Psychology Association, 39 percent of millennials say their stress increased last year, compared to 36 percent of Gen Xers, 33 percent of baby boomers and 29 percent of “matures” — workers over 67.

To educate employees about mental illness, particularly younger workers, and encourage them to seek help, American Express launched the Healthy Minds program in 2012. The initiative, headed by Lattarulo, uses upbeat messages and novel approaches to mental health awareness, such as bringing in a standup comic to talk about depression.

Unlike many of their older colleagues who are uncomfortable talking about mental illness, millennials aren’t shy about sharing the details of their daily lives on social media or at work, forcing employers to rethink how they communicate about mental health, according to Clare Miller, director of the Partnership for Workplace Mental Health, a program affiliated with the American Psychiatric Association.

“Millennials don’t have feel the stigma that other generations do when it comes to talking about mental health issues,” she said. “They’ve grown up in an era when social media is part of their lives and there are no demarcations between personal and work life. This is something new for employers. It’s bringing things to a head as to how you manage these discussions in the workplace.”

She points to American Express’ decision to invite a comedian to talk about mental illness as one example of innovative approaches to reaching younger workers. “A comedian talking about it is a tricky thing, but it speaks to this new world that we are in.”

[Related story: “Is Your Workforce Happy?”]

At consulting firm Ernst & Young, where the average age of its 240,000 employees is 27, company leaders have no choice but to tailor their mental wellness efforts to a younger population, according to Sandra Turner, director of EY Assist, the company’s EAP.

Last year the firm launched its R U OK initiative, which encourages employees to reach out to colleagues who may be struggling with depression. It’s a based on a suicide prevention program developed in Australia in 2009. Since it was launched in October, EY’s employee assistance program has seen a 30 percent increase in utilization, Turner said.

While she can’t say if the spike could also be a reflection of an adversarial election season last fall, the launch of the initiative seems well timed.

“I’m sure that issues around police violence in the community and the election cycle has caused a lot of tension and stress in the workplace,” she said. “I wish I could say we timed it to address some of that, but we had this planned in January 2016. Still, I’m so glad that we had this program available.” 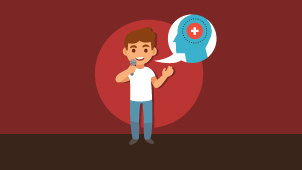